Boy (and girl) it’s cold outside! Like polar vortex cold. But being cold is not always a bad thing.

In Pennsylvania, a little 2-year-old boy fell into a large icy creek and was swept downstream for a quarter mile before he washed up on dry land. He was found pulseless and not breathing. EMS was called, and upon their arrival, they started CPR (cardiopulmonary resuscitation). CPR was continued as the little boy was flown, by helicopter, to an emergency room. His temperature was 77 degrees, which is significantly lower than normal body temperature (97-99 degrees Fahrenheit). He was very, very cold. Attempts to resuscitate him continued in the emergency room, as they started to administer warm IV fluid to warm his small, cold body. After more than an hour and a half of CPR, a pulse finally was detected. He was then placed on a ventilator and admitted to the hospital. A few hours later, the little boy woke up. He was found to have no neurological damage, and he was discharged home with his parents five days later.

Purposely Cooling A Baby Can Be Helpful Medically

Studies have shown purposeful hypothermia treatment (intentionally lowering the body temperature below normal), in the hospital setting, reduces the risk of death or disability in infants with hypoxic-ischemic encephalopathy (death of brain cells when deprived of oxygen). Hospitals have developed hypothermia protocols designed to safely lower an infant’s temperature in order to decrease the extent of brain injury in newborns with hypoxic-ischemic encephalopathy.

Hypothermia Protocols Typically Include the Following:

Devices and methods used for therapeutically cooling an infant include a device called the “CoolCap.” This device regulates the temperature of the infant's head by circulating cold water inside a thin plastic cap that is held in place by a fabric hat. Using water temperatures between 50 and 59 degrees Fahrenheit, the infant's normal body temperature is cooled to 94 degrees. Another method of cooling is the use of a cooling blanket. Generally, the blanket is placed both above and underneath the patient. The cooling blanket is covered with a sheet or blanket, so it is not directly in contact with the infant’s skin. The blanket is attached to a machine that pumps water through it at a set temperature (the temperature typically is managed by nursing). It is IMPERATIVE that the infant’s temperature be monitored continuously during these 72 hours of cooling and then ongoing while the infant is rewarmed. 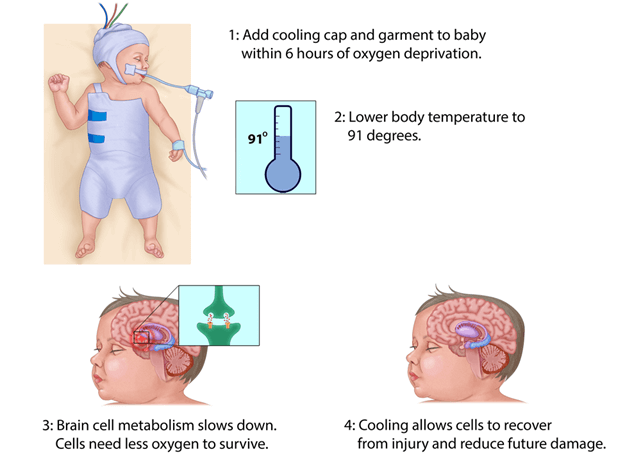 Close monitoring of labs, at least every 4 hours, will alert the caregivers to the need for blood products, for electrolyte replacement, and for any developing skin issues. While there are many complications possible with the use of hypothermia treatment, the benefits of this treatment can be enormous. Close monitoring of the infant undergoing this treatment significantly decreases any lasting effects of possible complications.

At The Eisen Law Firm, we help families whose children have been injured due to medical negligence, including those infants who suffered extensive injury because hypothermia treatment was not given or was given incorrectly. If you think your infant suffered complications related to the use or lack of use of hypothermia treatment, contact us at 216-687-0900 or contact us online.