Cerebral Palsy (CP), is a developmental disorder that affects movement, posture, balance, and coordination. It is defined by loss or impairment of motor function caused by injury to the brain. While the disorder of CP can be defined, having CP does not define the person.

Each year, more than 10,000 children are diagnosed with cerebral palsy. Most cases of CP are diagnosed by age three. The condition causes different types of motor disorders. The symptoms of CP can vary from mild, (speaking challenges or walking with a small limp) to severe (being confined to a wheelchair with little use of limbs or any ability to communicate). While each case is different, one thing they have in common is that very few of the affected families will seek legal advice or action. 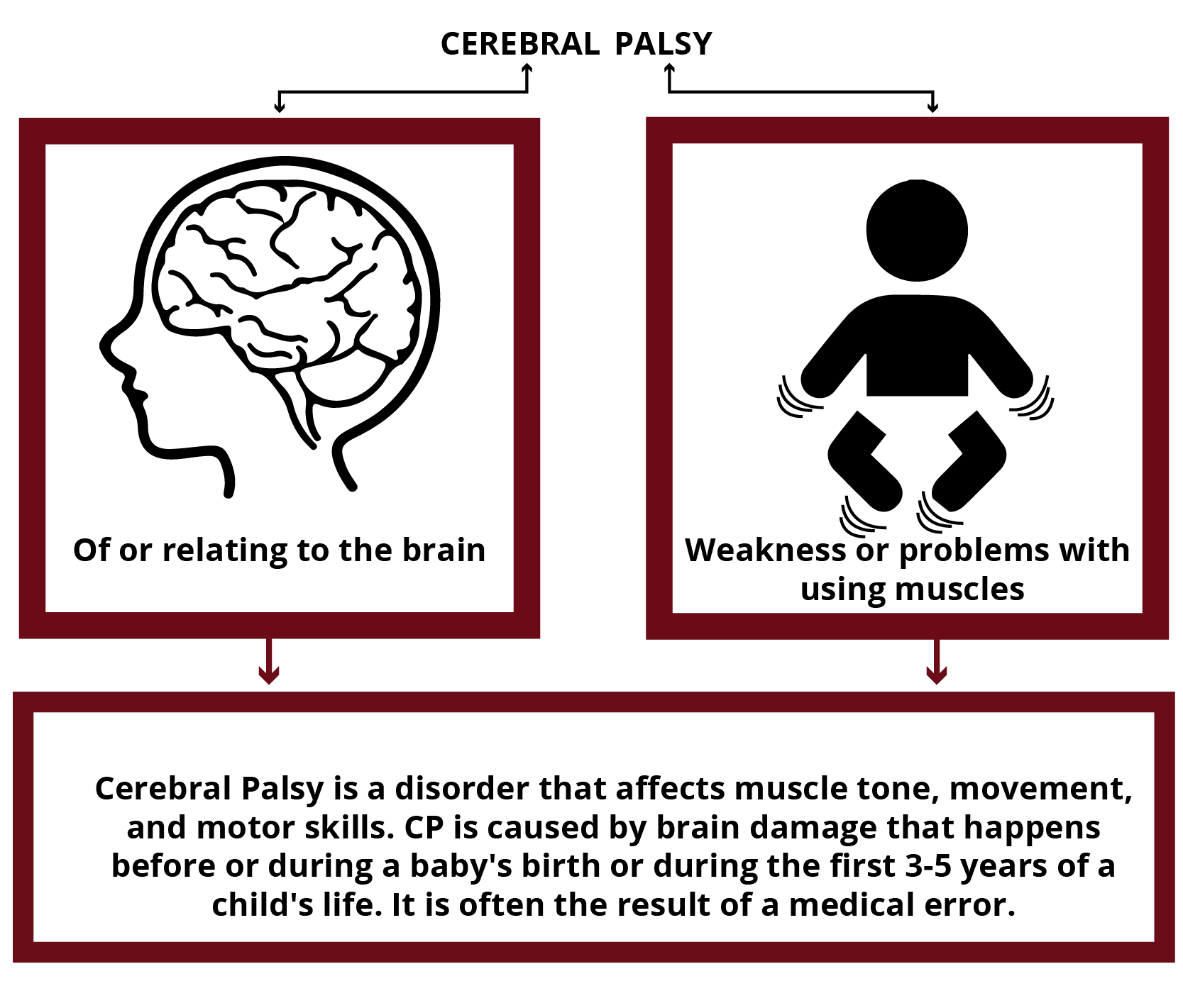 Cere bral simply means relating or having to do with the brain. Children with cerebral palsy have injuries to one or more areas of the brain controlling movement, muscle tone, balance, and coordination. The Cerebrum is the biggest part of the brain. It is divided into left and right hemispheres and into four lobes – the occipital, temporal, frontal, and parietal. The cerebrum controls senses, thoughts, and movements. Each lobe performs different tasks, but they all work together to integrate complex sensory and neural functions and to initiate bodily movements. The Cerebellum is at the back of the brain. Its role includes coordinating muscle movements and controlling balance.

Palsy is a medical term which refers to various types of paralysis including weakness or problems with using muscles. Palsy also includes involuntary body movements, such as shaking, tremors, or uncontrollable stiffness. 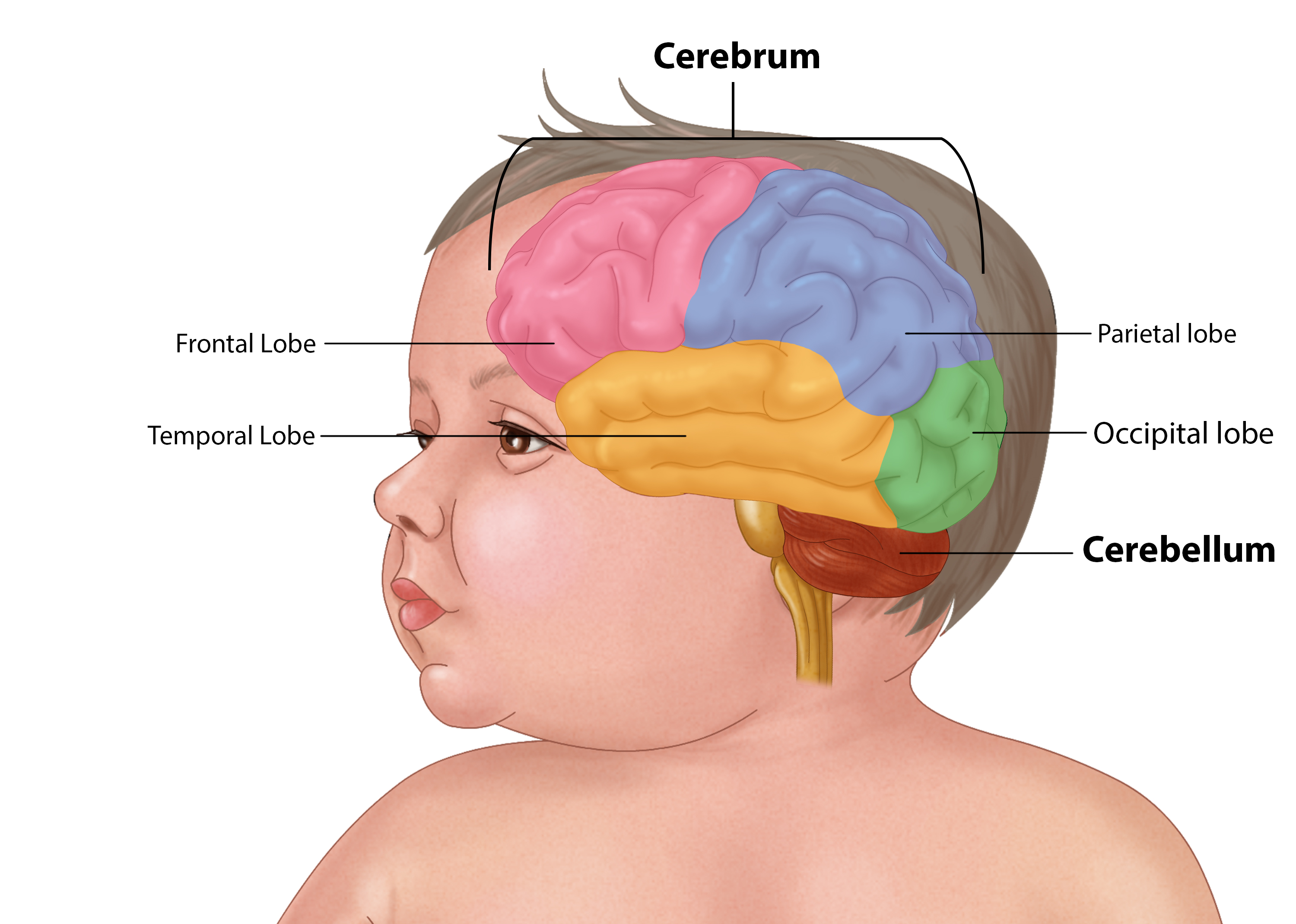 How do I Know if my Baby Has Cerebral Palsy

More often than not, parents who seek our help already know their child has cerebral palsy because the diagnosis was made at or near birth. However, cerebral palsy is a complicated disorder. There are four different types of cerebral palsy, various levels of severity, and a wide range of side effects and impairments from the disorder. This can make diagnosing cerebral palsy difficult. While some children will be diagnosed early, others will not be diagnosed until much later because of the complexity of this disorder. Many signs and symptoms of cerebral palsy become evident at about 7-9 months. This is when most babies start to move around and use their limbs. Developmental delays are more easily noticed by medical professionals, family members, caretakers and friends at this stage of growth.

Children with cerebral palsy have both signs and symptoms of the disorder. Signs are things that can be observed by others. Signs that your child may have cerebral palsy include seizures, tremors, stiffness, floppiness, exaggerated reflexes, and problems with grasping, sucking, or babbling. In the early years, before a child can communicate, we can only look for signs of cerebral palsy. As children get older, however, they can let us know about symptoms they are having. Symptoms are things that are experienced by the person with the disorder rather than directly seen by others. Examples of symptoms include things like pain or muscle soreness.

During baby’s first year, frequent visits to the pediatrician should include various tests that look for signs or symptoms that your child is developing at a normal rate. If your child does not meet these developmental milestones, more testing may be needed to see if cerebral palsy might be the reason these milestones are missed. That doesn’t mean parents should look up a checklist of developmental milestones and freak out when their child doesn’t hit all the milestones at precisely the “expected” moment. There is plenty of variation in terms of when children reach milestones. Still, any significant delay should be reported and investigated further.

Caring for a Child with Cerebral Palsy

Cerebral Palsy requires a lifetime of care. Your child will have medical bills, rehabilitation costs, therapy sessions (physical, occupational, speech and language), assistive devices, potential surgeries, and other treatments/accommodations to maximize their abilities and make their life as easy as possible. Since not all cerebral palsies are the same, the extent to which your child will need assistance and treatment will vary.

While nothing can compensate you for the heartache and grief you’ve experienced, the birth injury attorneys at The Eisen Law Firm can help you discover if your child’s cerebral palsy was caused by the negligence of a health care provider. We can help you obtain the compensation you deserve, and this compensation can help you ease or eliminate the financial burden of raising a child with cerebral palsy. Call us at 216-687-0900 to schedule a free consultation. You pay nothing -- no fees, no expenses, nothing -- until we win.